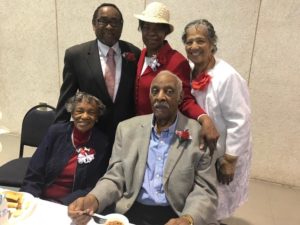 The inaugural Henrietta Lacks Legacy Group’s (HLLG) Steelworkers Program occurred in April 2014 to commemorate the contributions of African-American Steel Workers to the development of Baltimore and the nation. The Second Annual Steelworkers Program was hosted by union leader Eddie Bartee (who served Vice President and President alternately for 32 years, the longest record held in the top five positions in local union history) and focused on former steelworkers’ experiences and histories while working at Bethlehem Steel. It was the economic opportunities afford by Bethlehem Steel that attracted Henrietta and David “Day” Lacks to Turner Station in 1941.

The Henrietta Lacks Legacy Group presents programs each April to honor the contributions of steelworkers to the development of the area and the nation. According to Courtney Speed, president HLLG, “We have an obligation to keep these courageous men and women’s stories alive. They were also instrumental in the development of Turner Station.” All programs feature the traditional steel workers fare of hot dogs and baked beans, and the public is invited to attend free of charge.

The Fifth Annual Steelworkers Program focuses on multi-generational perspectives and will honor union leader Lee Douglass. The keynote address will be offered by Labor Historian Bill Barry. The program is scheduled for Wednesday, April 3, 2019 from 12:00 p.m. until 2:00 p.m., at the Fleming Senior Center, 641 Main Street, Turner Station, MD 21222. The program will also feature the traditional steel workers fare of hot dogs and baked beans, and the public is invited.